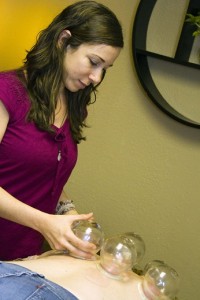 In addition to acupuncture and herbology, cupping therapy has been part of Chinese medicine for over 2,500 years. But it’s become hugely popular after Michael Phelps was shown with the typical cup marks on his body during the Rio Olympics. Originally, animal horn was used for cupping, later on brass, ceramic, and bamboo cups were used. Today, we use glass cups in a variety of different sizes.

Cupping is like a very deep tissue massage. The practitioner applies heat in a cup and then applies that cup to the body, most commonly on the back. The heat creates a vacuum effect and draws the skin up into the cup. The result is a movement of fresh blood to the area, release of toxins, acupuncture point stimulation, increased circulation of blood and lymph, relaxation of tight muscles, and reduced inflammation.

Cupping does leave noticeable marks similar to a bruise or hickey that is sometimes referred to as “cup kisses”. Although they can look alarming, they are not painful and will disappear on their own within 3-7 days.

Most commonly, it’s used for aches and pains of various types including low back and leg pain, neck and shoulder tension, and fibromyalgia. It also helps open up the chest and benefits the lungs to treat respiratory problems such as cough, bronchitis, asthma, and the like. It and can even benefitmenstrual problems and digestive problems including stomach aches, vomiting, and diarrhea.

Schedule an appointment with one of our acupuncturists to experience this ancient healing modality first hand.

Acupressure is a branch of traditional Chinese medicine which involves the stimulation of acupuncture points with finger pressure using the power and sensitivity of human touch, rather than inserting needles. This form of healing is non-invasive and gentle. The indications include the vast array of conditions that Chinese medicine has proven to treat effectively. Because acupressure stimulates the body’s natural self-healing abilities, it also works as a great preventative therapy. Generally, the effects of acupressure are less potent than those of acupuncture, and as a result more treatments are needed to get the same results.

Acupressure is ideal for children. It is gentle, safe, and effective for many conditions, including relief and prevention of colds and flu. Parents can also be taught self-help techniques to use on their child at home.

Acupressure is also suitable for the elderly suffering from conditions including sciatica, arthritis, mobility problems, constipation, and poor circulation.

Certain acupressure points must be avoided during pregnancy. Be sure to tell your practitioner if you are or may be pregnant.

Moxibustion evolved thousands of years ago in early northern China. It is part of traditional Chinese medical practices and came about at the same time as acupuncture.

Moxibustion involves the burning of moxa, an herbal wool made from the leaves of the Mugwort plant, over specific acupoints. The moxa is often formed it into a small cone and placed on the tip of a needle or rolled into a cigar-like shape and passed over the skin in wave-like motions. The radiant heat produced by moxibustion penetrates deeply into the body to restore balance, promote circulation, and reduce pain. This form of treatment, usually combined with acupuncture, is indicated for improving general health and treating chronic conditions such as arthritis, digestive disorders, pain, infertility, ulcers, and many other ailments.

Many times the practitioner will send the patient home with a moxa stick so that it can be applied regularly between treatments. The burning of moxa will produce a potent smoke. For people who have asthma or respiratory problems, smokeless moxa can be used.

Nutrition is a very important element of the complete Traditional Chinese Medicine system. It is one of both healing and disease prevention. Many diseases and symptoms can be treated with dietary changes alone; however it often takes longer and requires the utmost compliance and dedication on the patient’s behalf. Unfortunately, today’s population has a poor concept of what constitutes a good diet. The fast paced lifestyle often gives nutritious eating a low priority. At the same time, mind-boggling numbers of different diet fads and controversial dietary regimes add even more confusion to modern day eating habits. As a result, we see deterioration in the quality of people’s lives in the form of obesity, depression, diabetes, cardiovascular disease, arthritis, etc.

Chinese nutrition uniquely differs from modern Western nutrition in that it determines the energies and therapeutic properties of foods instead of analyzing the chemical constituents of them. The advantage of this approach lies in its ability to customize to every individual’s needs. Furthermore, Chinese nutrition takes into consideration such factors as method of preparation, body type, season, and one’s geographical location in determining the appropriate diet. Schedule an appointment for a nutritional consultation today and begin your healing journey with your next meal.

Auricular acupuncture involves the stimulation of the acupoints located on the ear with tiny seeds or pellets. The seeds are no larger than the tip of an unsharpened pencil, do not pierce the skin, and are painless when affixed. The client will leave these seeds in for up to 1 week and re-stimulate the points by massaging the ear several times each day.

There are over 200 acupoints on each ear that represent the anatomical parts and functions of the human body. These points are arranged on the ear in the image of an inverted fetus. By observing points of tenderness, coloration changes, protrusions or depressions, and skin variations, a trained practitioner can not only treat a wide range of diseases using only the ear, but can diagnose them as well. When we stimulate these points we access the central nervous system through the cranial nerves on the auricle of the ear. This sends a direct message to the brain that results in a healing response.

"Christina, I am so thankful that I was lead to you. What a joy and a blessing it was to come to you for acupuncture. You have a gift of kindness, understanding, compassion and assisting in healing. You " Read More

"I came across Christina prieto by chance. My very first visit was out of this world. I went in with road rage, tension and of course a little doubt. I left there the calmest I have ever been in my..." Read More

"Dear Christina: My daughter, Jackie had been suffering from chronic headaches for almost five years. As you know, we have tried every conventional method to treat her symptoms. About four years ago, her...." Read More

"Dear Dr. prieto, Thank you so much for all of your help and caring along this journey with me. When I came to you I had been trying to conceive another child for 7 months and my OBGYN had told me nothing..." Read More

"Dear Christina, I can't express enough how appreciative I am since I've been coming to you for acupuncture. I gave up on Western medicine. I had been sick for 6 and..." Read More

"Dear Christina, Thank you so much for answering my e-mail in such a timely fashion and mostly for all the information that you sent. You have been so helpful and have given me a "starting point..." Read More

"I’d heard of stories of infertile women receiving acupuncture and successfully getting pregnant, but never men. I was surprised when I spoke with Dr. Christina prieto the first time, and she suggested that correcting male-factor infertility is often easier than female issues. After only 3 months of acupuncture with her, a repeat sperm analysis revealed..." Read More

"Hello Miss Christina, After two days of the worse back pain I can remember in years, I eagerly became acquainted with you and your caring and healing processes. I felt the moment I walked into your ..." Read More

"Hi everyone! Wanting to let you know of a wonderful Acupuncturist for those of you who have expressed interest in resuming treatments. I know many of you have..." Read More

"In January of 2006 after having heard from various sources that acupuncture could help me with my fertility problems, I decided to reach out and try it. I came across Christina prieto by chance. My very first visit was out of this world. I..." Read More

*Disclaimer: In accordance with the FTC guidelines concerning the use of endorsements and testimonials in advertising, please be aware that the testimonials appearing on this site reflect real life experiences of those who have used our services. However, they are individual results and results do vary from person to person and cannot be guaranteed.